We love music, and with every performance we like to make sure there is something for everyone regardless of age or nationality. Martin and Tom teamed up in 2008 when Martin was a Music Journalist for AND GUIDE working on a feature about Tom’s live percussion. They found they had a similar passions for music, independent venues, vinyl records, car boot sales, wombling, gramophone players, vintage bicycles, tea and cake! 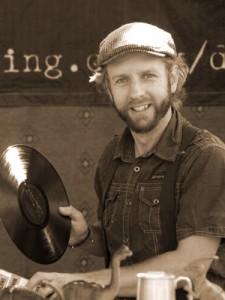 Actively involved with live music and DJing for over fifteen years, with his first ever show for the university orchestra ball. Being musicians meant they weren’t particularly fond of commercial dance/chart/club ‘music’, but had huge admiration for a broad variety real musicians.  This, in many ways, paved the way for his work today.

Martin was brought up on a healthy diet of Classical, 60s and Folk, and has a love for music history, world music and local music. He found a lot of amazing music while travelling, working as a music journalist, and is always on the look out for great records and musicians.

He also has a passion for 1950’s cars, especially P4 Rovers (a 75 and a 105R if you’re into this kind of thing!), loves camping, hiking, history, nature photography in remote parts of Africa, live music, has a pet tortoise and enjoys trying out tea rooms! 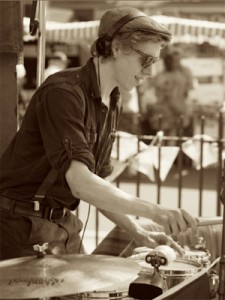 DJ-ing for over 15 years Tom has toured from Southampton to New Zealand and many roads between, with live percussion adding an expressive, improvised and fresh slant on the show.

He has been involved in music all his life, and has released tracks on Vinyl. Well known for Reggae, Dub and Ska with live Percussion (theuplifter.co.uk).

Tom is also well known for his dinosaur collection, which make a regular appearance spinning on record decks at shows! He also loves skate-boarding, theatre, camping, traveling, live music, nutella, history, has a pet cat (who’s fluff often makes an appearance on our kit bags!) and a bearded dragon (the closest thing he could find to a real dinosaur!), and also loves trying out various tea rooms!

Where do we perform?

Here are some examples of the places and events we have performed at:

Bands and performers we’ve worked with or supported

(There are also many we’d love to work with, such as The Cat Empire, Manu Chao, The Big Chris Barber Band, Jimbo Mathus, Chas & Dave, Nina Simone, Jimi Hendrix, The Pixies, Mark Knopfler, Louis Armstrong and many more… so please bear this in mind for your event or festival etc!)

All good fun, but here’s the bit where we put our ‘serious hats’ on because (it has to happen from time to time!).

We have full Public Liability Insurance coverage, our kit is safety tested, wires are always taped down or neatly hidden so they can’t be tripped up on, and we always respect venue music licence.

We believe in having a ‘Plan B’ so when we supply our own sound system we bring two of everything so we have full back up.

We have two vans between us – one of which is a high wheel base 4×4 off-roader which means we have no problem with muddy festivals or shows up mountains during blizzards!

We always arrive early to allow for a full sound check prior to performance.

For further details or bookings please feel welcome to contact us.

"I wasn’t a fan of DJs, until I saw you guys. You play the music by the great musicians that inspired me to learn to play music. Absolutely brilliant!"
Nic

"Gentlemen, Where do I begin?
We cannot express our thanks enough. You guys made it, and the dinosaurs too of course. Seriously though, you guys were beyond what we hoped for. So many people have said how much they liked it all, which was visible from all the (sometimes crazy & odd) dancing! You were simply and utterly superb. We look forward to seeing you again."
David & Suzie

"Apparently you were terrific"
Someone who missed us at a festival!